Åkvarteret is part of Horsens’ historic town centre, where Bygholm Å was filled up in 1904. In January 2020 Horsens Municipality arranged a parallel competition for a development plan for Åkvarteret in Horsens.  With the competition, the municipality wished to illustrate the possibility for the reopening for Bygholm Å, partly to generate more urban life and activity in the area, and partly to climate proof the town centre, which is particularly exposed to storm surges.

Together with TRANSFORM, LYTT Architecture has devised the competition proposal ‘Byens Vand’ (‘The Town’s Water’) based on the four themes of the competition: urban development, climate adaption, infrastructure and urban spaces and connections. With the proposal, the team has wanted to reintroduce the water into Horsens’ town centre. Historically, the water – the fjord and the stream – has had an essential impact on the town, which was laid out by the outlet of Bygholm Å. The water created good conditions for transport, trade, fishery, and agriculture, whilst at the same time providing natural protection. The water was the town’s livelihood and a source of growth. However, since then the historic dependence of the water has been diminished and the town’s contact to it weakened. Today, the water is merely a recreational quality, and the direct contact to the town centre has been erased.


With the team’s proposal ‘Byens Vand’ the water is reintroduced into Horsens’ town centre – both as a recreational element for the town’s citizens and visitors as well as part of the future climate proofing of Horsens. Today, the competition area is dominated by cars and paved surfaces. This results in widespread paved areas that induce running-off of rainwater, risk of superheating during the summer half-year, which means that the area does not invite for much urban life and activity.


We are suggesting to let the water penetrate into the new urban area from the outside; a reverse delta, where the water in Horsens becomes a network of channels with contact to the harbour and the fjord instead of flowing from the hinterland. The water’s historic lines – both the ones that can still be read in the terrain and the historic facades as well as the ones that have been erased – are significant layers in Horsens’ DNA and are used in the plan for the reintroduction of the water on the central part of Horsens.


Thus, ‘Byens Vand’ is a suggestion for a masterplan that creates a new central district in Horsens, ties the town together and reinforces the connection to the harbour. The new Åkvarter will appear as dense urban spaces, well-defined courtyard areas and downsized buildings, so that urban life and vulnerable road users are prioritised rather than cars creating a nice environment for the citizens in the new urban spaces. This means that the plan promotes a varied urban life with water as an integrated element that provides Horsens with a valuable water edge.


The plan can be carried out in smaller stages, which ensures that it is realisable and economically sustainable. The first step is ‘Hængslet’ from where blue urban spaces and building plots can be developed from east to west. 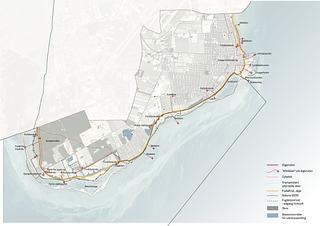